One day in April 2019, the residents of Durham, North Carolina, saw the sky turn a peculiar but familiar shade of chartreuse. Enormous clouds of a fine, yellow-green powder engulfed the city. It looked, and felt, like the end of the world. “Your car was suddenly yellow, the sidewalk was yellow, the roof of your house was yellow,” says Kevin Lilley, assistant director of the city’s landscape services. Residents, quite fittingly, called it a “pollenpocalypse”.

Male trees are one of the most significant reasons why allergies have gotten so bad for city dwellers in recent decades. They’re indiscriminate, spewing their gametes in every direction. They can’t help it—it’s what evolution built them for. This is fine in the wild, where female trees trap pollen to fertilize their seeds. But urban forestry is dominated by male trees, so cities are coated in their pollen. Tom Ogren, horticulturalist and author of Allergy-Free Gardening: The Revolutionary Guide to Healthy Landscaping, was the first to link exacerbated allergies with urban planting policy, which he calls “botanical sexism.”

In trees, sex exists beyond the binary of female and male. Some, such as cedar, mulberry, and ash trees, are dioecious, meaning each plant is distinctly female or male. Others, such as oak, pine, and fig trees are monoecious, meaning they have male and female flowers on the same plant. It’s easy to identify female trees or parts—they’re the ones with seeds. And yet more, such as hazelnut and apple trees, produce “perfect” flowers that contain male and female parts within a single blossom. But while both monoecious and male dioecious trees produce pollen, Ogren claims the latter are primarily to blame for our sneezes and watery eyes.

Ogren has been talking about this botanical misogyny for over 30 years. After buying a house in San Luis Obispo with his wife, who suffers from allergies and asthma, Ogren wanted to get rid of anything on his property that might trigger an attack. He began examining the neighborhood, plant by plant, when he noticed something unusual: All the trees were male.

At first, he thought this pattern may just have been a strange quirk of one city. But when he studied frequently landscaped plants in other cities, he noticed the same thing: males, all the way down. “Right away I started realizing there was something weird going on,” he says. While tracking down the origin of this trend, Ogren stumbled upon perhaps the first trace of sexism in urban landscaping in a 1949 USDA Yearbook of Agriculture. The book advised: “When used for street plantings, only male trees should be selected, to avoid the nuisance from the seed.”

Urban forestry’s apparent sexism seems to boil down to our distaste for litter. The USDA reasoned that tiny allergenic spores are likely to be blown away by wind or washed away by rain, making pollen an easier civic task to manage than, say, overripe fruit or heavy seed pods that would need to be cleaned up by actual humans.

The preference indicated by the USDA recommendation is one element of the story—the other is something more tragic, from an arborial perspective. In the first half of the 20th century, lush, hermaphroditic, not-so-allergenic elm trees towered over many American streets. But in the 1960s, a virulent strain of Dutch elm disease, a fungal illness spread by the bark beetle, stowed away on a shipment of logs from Britain. The fungus wiped out some of American cities’ longest-lived trees and left many streets almost entirely devoid of green or shade. By 1989, an estimated 75 percent of North America’s 77 million elms were dead, according to the New York Times.

City planners and landscapers repopulated the nation’s barren, sun-scoured streets, according to USDA guidelines, with more than 100 new varieties of maple clones, Ogren says, all male. Over the years, male willow, poplar, ash, mulberry, aspen, and pepper trees joined them. As these trees matured, they shed increasing quantities of pollen. Nurseries began selling more male plants, too, in part because it is easier to clone an existing tree than to wait for males and females to pollinate each other naturally. Now, it’s not just trees and shrubs, but ornamental plants sold in urban nurseries that skew male. “Botanical sexism runs deep,” Ogren says. 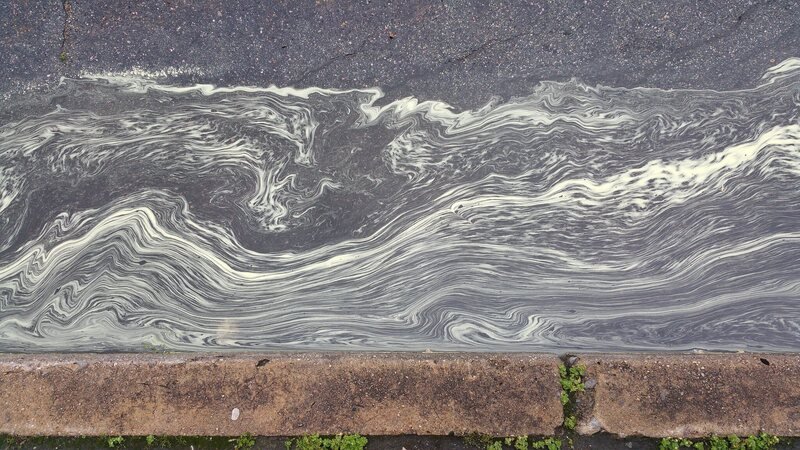 Pollen swirling in a puddle. Photo by Eli Christman / Flickr.

In a cruel kind of irony, if urban landscapers had prioritized female trees in the same way, neither pollen nor unsightly seeds or fruit would be much of an issue. “If they had done it the opposite and planted hundreds of female trees with no males, it would have been just as sterile and tidy, without any pollen,” Ogren says. “Female trees don’t make fruits or seeds if there are no males around.” A large tree will scatter the majority of its pollen within 20 or 30 feet from its roots, Ogren says, so relatively isolated female trees simply wouldn’t bear much fruit.

Another argument proffered against female trees is that certain ones can produce an unpleasant odor. For example, when a lady gingko tree is in heat, it produces an odor not dissimilar to rotting fish or vomit. Ogren cedes this point. But if a city planted only female gingkos, decreasing the chance of fertilization, there would be neither pollen nor its infamously noxious postcoital odor, he says.

Ogren sees gingko gametes as the far greater threat. Unlike almost every other plant, gingko trees produce motile sperm, capable of swimming in pursuit of germination. Where human sperm each have a single tail, or flagellum, gingko sperm have around a thousand. “Once the pollen gets in your nose, it will germinate and start swimming up there to get to where it’s going,” Ogren says. “It’s pretty invasive.”

To guide cities to plant less allergenic trees, Ogren developed the Ogren Plant Allergy Scale (OPALS). The scale rates plants from 1–10 based on their allergy potential. But while certain institutions, such as Ogren’s hometown of San Luis Obispo and the California Public Health Department, have consulted OPALS while landscaping new developments, cities have been generally slow on the uptake. “It’s much harder to make changes when everything is already planted,” Ogren says. “Nobody wants to cut down trees.” Instead, Ogren wants cities to replace dead or dying trees with low-allergy options, such as hawthorn, mountain ash, and service berry trees. In certain cases, such as around day cares and hospitals, Ogren advocates actively removing extraordinarily allergenic species such as male elder, yew, and mulberry trees. (For most people, urban allergies are a seasonal nuisance. But for vulnerable populations, such as children or adults with respiratory conditions, they can be much more serious—even deadly.)

Most of Ogren’s current battles are hyper-local. He recently walked by a children’s center in Santa Barbara where a massive Podocarpus tree (a 10 on OPALS) was planted by the entrance. “It had so much pollen that if you flicked your finger on a leaf, a huge cloud would spurt out,” Ogren says. “So now I’m in a fight with the city of Santa Barbara.” Ogren’s proposal isn’t to chop down the tree but to have it regularly cut back, which would slow pollen production. In comparison, female Podocarpus trees produce a fruit around the size of an olive—and are a 1 on OPALS.

Though the biology behind Ogren’s idea passes muster in the field of urban forestry, many experts shy away from his terminology. Paul Ries, the director Oregon State University’s College of Forestry, sees botanical sexism as just one arm of the larger, historical problem of lack of diversity in urban forests. “Anytime we plant an overabundance of one type of tree, whether it is a single species, a genus, or, in the case of so-called ‘botanical sexism,’ male trees, there are bound to be problems,” Ries says. He cites the downfall of species that were widely and homogeneously planted, such as Bradford pear and ash trees, the latter of which are fighting a losing battle against an invasive, wood-chomping beetle called the emerald ash borer.

Still, Ries believes Ogren is on to something, adding that he’d like to see more research on the unintended effects of over-planting male trees. “I just wouldn’t call it sexism. Ascribing a real-life human problem to the botanical world might seem like we’re trivializing what humans, particularly women, face,” he says.

Terminology aside, the problem shows no signs of getting better. Unsurprisingly, climate change isn’t helping. According to a recent study in Lancet Planetary Health, the increase in extreme temperatures contributes to more potent allergy seasons. Summers come earlier and last longer, and certain species, such as cypress and juniper, have begun blooming again in the fall, Ogren says. In Durham, Lilley says he’s never seen anything as monumental as April’s pollen clouds in the city before. While it’s hard to say if the yellow sky was directly linked to climate change, pollenpocalypses will only become more and more common. It’s easy to see these clouds as freak occurrences—like a megadrought or superstorm—but they may be a sign of things to come.

Durham is far from the most pollen-polluted city in America. That superlative belongs to Tulsa, Oklahoma. (Durham ranks 67th, according to a 2018 report from the Asthma and Allergy Foundation of America.). But Durham now has the unusual potential to radically diversify the makeup of its botanical residents, as the majority of its trees are approaching their twilight years. In the 1930s and 1940s, the city’s public works department oversaw a massive urban forestation effort that saw thousands of willow oaks planted within the city limits. Though they thrived for nearly a century, the oaks are reaching senescence. Under Lilley’s guidance, Durham has begun to reforest with a more diverse array of trees, including pines, maples, elms, dogwoods, and cherries.

Durham has no official guidelines for what kinds of trees can or will be planted, though the city does ban female gingkos. “The sex of the tree isn’t something we pay attention to,” Lilley says, adding that he hadn’t heard of the concept of botanical sexism. But he says Durham makes an effort to plant mostly monoecious trees, or ones with both male and female parts.

Ogren sexes trees wherever he goes; he can’t help it. He recently visited Sacramento for a conference and saw a dozen cedar trees planted by the capitol building—all males. On a recent trip to London, he spotted a veritable forest of male sweet bay trees. He was asked to give a lecture on botanical sexism in Christchurch, New Zealand, where he spent the entire day hunting around the city for a single female Podacarpus totara tree (spoiler alert: males, the lot of them). “A big part of the problem is most people don’t know much about trees, and think, well, trees are good and no trees are bad,” he says. “But trees are just like people, they have a multitude of differences. Some trees are human-friendly, and some are just the opposite.”

Sabrina Imbler is a staff writer for Atlas Obscura.