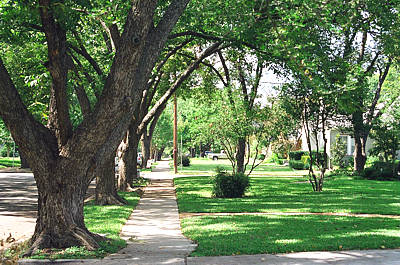 Dallas’ Urban Forest Advisory Committee was established in 2005 by the Dallas City Council to conserve as well as properly manage Dallas trees and city forests. Committee members advise city officials on best management practices for tree and forest related issues, educate citizens on the benefits of trees, and strive to re-shade Dallas by encouraging tree plantings.

In the early 1900s, many Dallas streets were beautifully lined with large canopy trees. However, by the late 1900s, many trees and shaded neighborhoods were being lost to poor tree maintenance, development and disease.

This loss generated support for the formal establishment of an urban forestry program in Dallas. In 2005, a lobbying effort was launched to encourage hiring Dallas’ first city forester. The project, led by Steve Houser—a certified arborist and tree advocate— succeeded, in part, with the help of a four-year grant from the Texas Forest Service. Due to the success of this effort, the next step was to establish a group of volunteer experts and professional advisors that would provide leadership in tree-and forest-related affairs.

In December 2005, the City Council acted by formally establishing the Urban Forest Advisory Committee (UFAC). The Committee —the only Advisory Committee of its kind in the region—was established as a permanent part of city government to advise city officials on all tree- and forest-related issues. UFAC’s members, appointed by the Mayor, are comprised of volunteers, tree experts, LEED certified architects, and professional advisors with a diversity of knowledge and experience in many various fields.